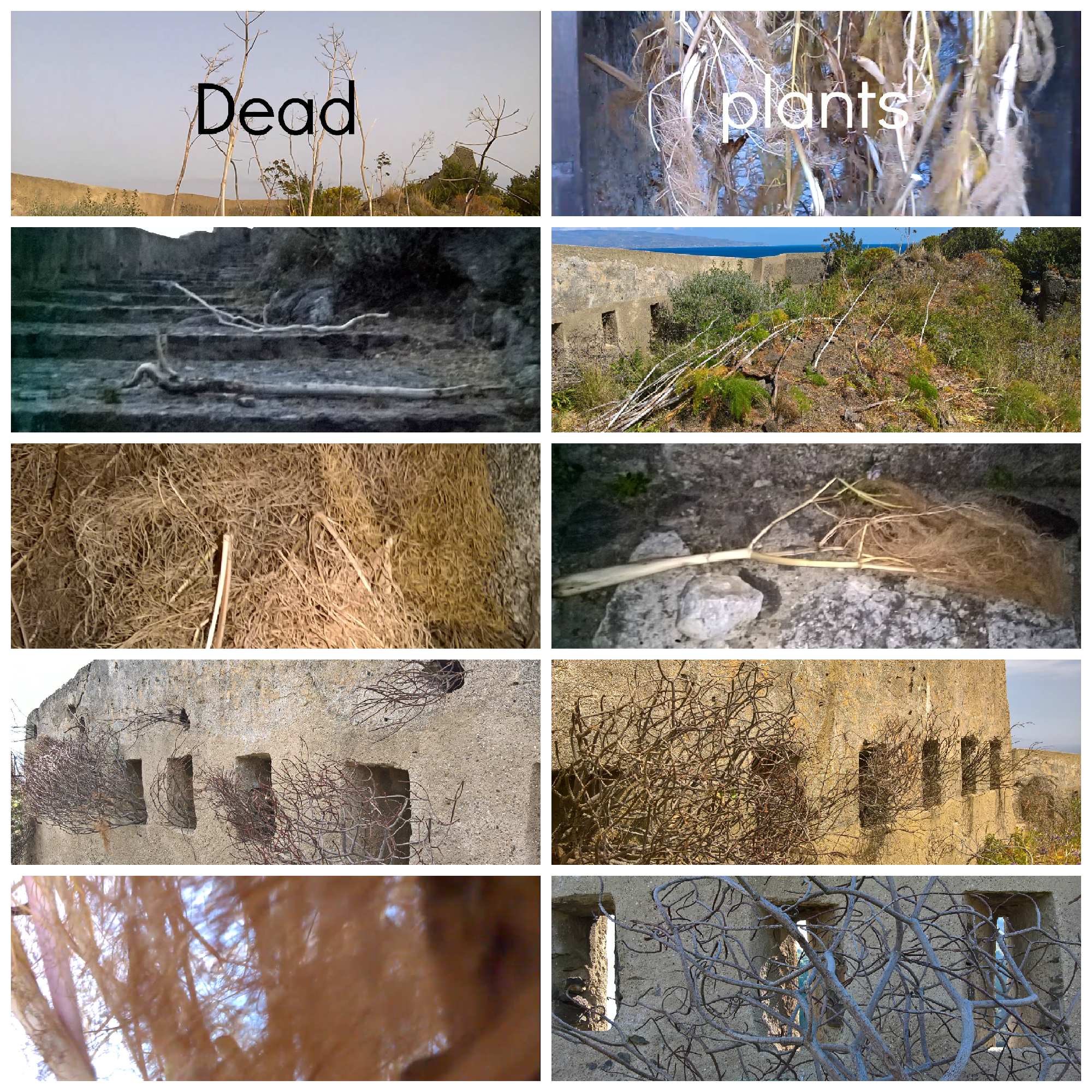 The dead plants
Arranging dead plants found in Scaletta Zanclea had to me at times more immediate function and overall an underlying driving force.
Curtain at the entrance of the castle made of dry giant fennel branches meant to mark the passage to a place where one can allow oneself more and is more open for reception, to take one defenses somewhat down. For a moment one is being brushed over by the plants, not knowing or seeing what is behind them, what is the meaning of it, and where does it lead to. Immersed and then free again to experience works that are awaiting visitors.
I found beauty, inquietude and gloom in branches placed on stairs to the castle. Similarly with dry trees that became part of Martina Caronna’s and Irina Baldini’s performance.
The driving force behind collecting the dead plants and making use of them is willingness to express sadness. Sadness of loosing home, sadness of loosing close people, sadness of some things that happened in my life, in life of my parents, in life of my grandparents, in all of our lives. And to accept this sadness.
Thank you to all of you who got engaged with the dead plants, helped with them and changed them. Your words, gestures, deeds and sheer presence made it all happen.
Jakub Bobrowski

Jakob, Kuba for us, in various sounds and accents. Wandering up and down for the path to the castle tower. Day by day. Taking up textures, fighting thorns, stones, sweat and the wind. From the sea to the higher point of the tower. Efficient collector, smiling. We engaged in a staged fight where I killed him in a gruesome way. Poor Koba, he died laughing and was reborn a second later with a big smile.
His rebirth was a happy one, as, later on, he was the only one to swim the Scaletta sea, the strait of Messina water of the utmost blue, famous to be icy also in the summer.

The 28 night the castle seemed angry at us. From down up, the light was out in the whole village because of some strange leak in the system. No one really felt like to climb again the couple kilometres or so of steep path. But Kuba had to carry the trees…

And so we took the tree on our shoulders. 8 of them. and all we were silent, one foot after the other, to the dark village, in the grasses.
And on the pavement of the castle, looking up, we saw the dark spectral presence of the tower and our hart weakened. Strong wind. Sky covered.
Someone started lighting the trees. And danced. And we sang.
And the shadow of the dead forest hugged the walls around, climbed the castle, that was wan.
“no one climbs up to the tower till the stars show themselves!”.
So said the old man. And the star came out while you were dancing between the dead plants. And the first one was Jupiter. And this was good. And we walked to give the tower the last assault…
(fredd)
dead plants, mazes, Scaletta, Story, tower, trees 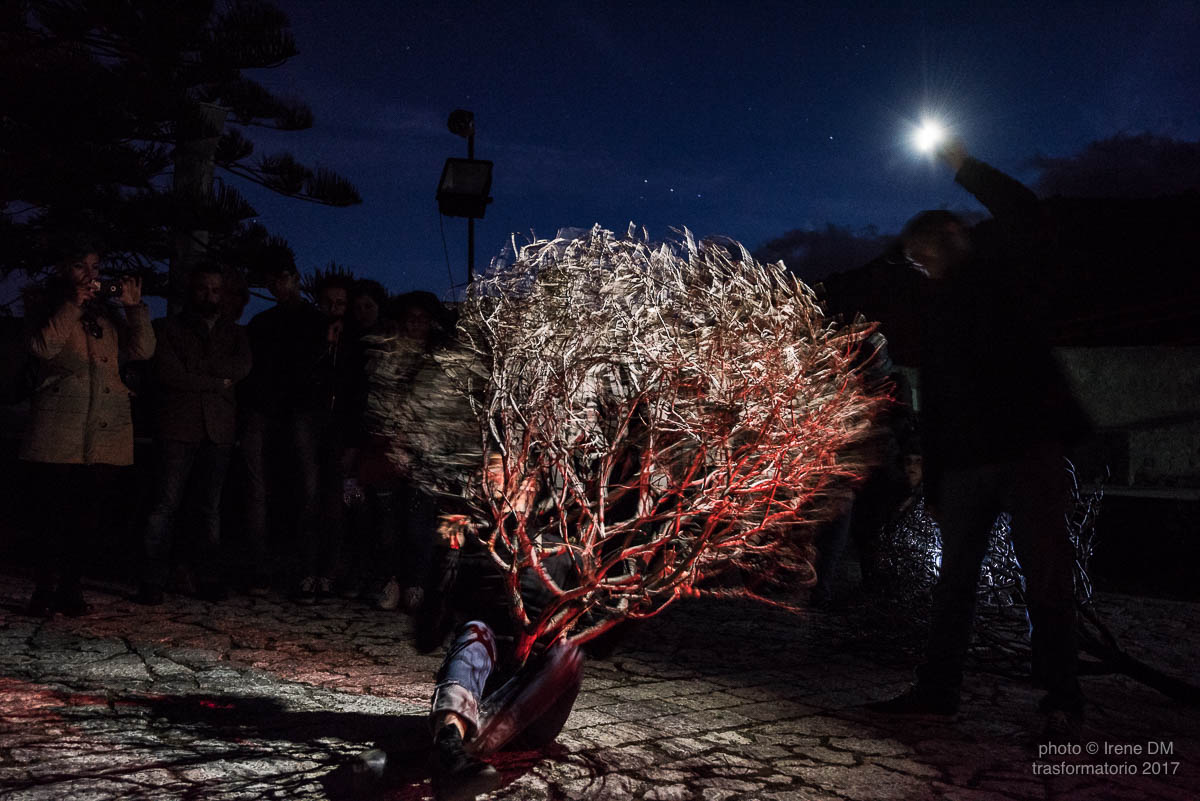 Some of the works have been presented this day. Some took shape during the presentation itself, as guided, inspired improvisations, till everyone entered the rooms of the tower, in pitch black that night, and got guided by their refined senses. Those documentation media and stories in a different butch.

The day started early, with a wounded falcon escaping a cat, under the bridge of the train, close to the sea. We tried to help but also fear that our intervention could have been disruptive. Maybe another sign from the spirits of the place. The sea gate was guarded by Horus? Or by the cat? The Falcon lately disappeared without any trace.
We went on eating some of the sheep that Eugenio the village butcher sacrificed in our honour. She cooked 7 hours in the wood oven behind his living room/shop. Another 7.

But officially all started as we took care of a group of people from Scaletta, as they came with us on the old path from the sea to the tower, a path that some of them did not step upon since 30 years.

The ascent was steady till the “Batteria” (Battery, both for cannons that to refuel our own), were the dancing stones from Nina Divitschek and Almud Krejza were waiting for us. Powerful poetry was repeated over and over, read from a strip of paper by Dierk Roosen in dutch language. And was translated by the Mother of RE, suddenly, with her german/sicilian incredible voice.
Then, after our offer, some asked to be blindfolded. We had brought too few bandages but improvised some more. And so, lead by friends, or family,  as they could see with other senses.
The passage through the old empty houses towards the end of the path was enriched with names of forgotten people. The “Cascionara”, an old lady that used to sit close to the st. Paul memorial image. People that n not o one talked about since long.

We arrived up, to the church. And up again to the castle.

The images in the gallery refer to what has happened in the castle thereafter. These gallery images are taken by Irene Dominguez that was indefatigable during these days. They are (as all content here) cc Attribution-ShareAlike licenced.

Trasformatorio is a project by Federico Bonelli aka as fredd hosted by Dyne.org foundation Amsterdam. All content is released with open licence FDL from GNU.org