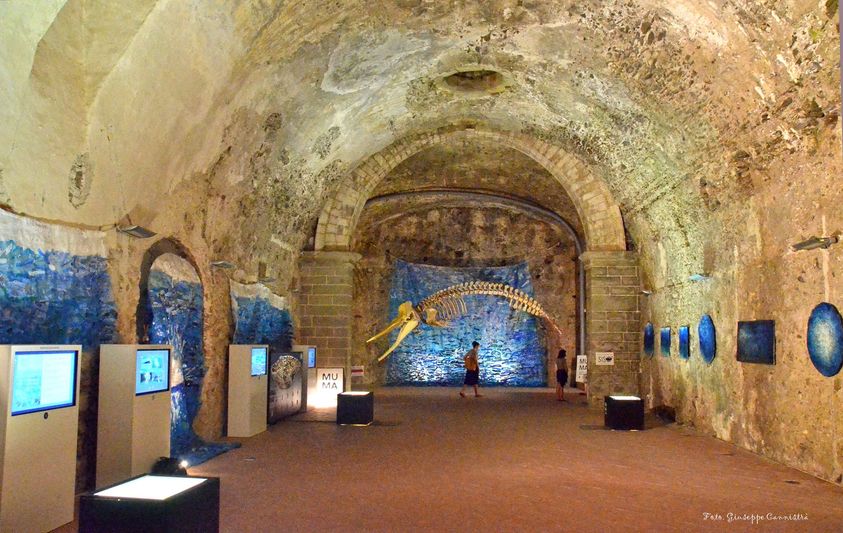 RE and the Abyss

The 14th of July, in Milazzo opened up a very special exhibition in a special place. Is the story of the MUMA,a museum that is the effort of a whole generation of deniers.
The deniers are those that don’t believe in the inevitability of evil.

MUMA has been recently build around a skeleton. The skeleton of a sperm whale, named SISO, died of plastic and illegal nets, whose body washed on a beach close by two years ago. The body was adopted by the sensitivity of a local biologist that started to clean the bones and the act became a message that gathered energies around the problem of conservation and respect of the sea. This message has been understood by the new generation of deniers and made it to a rapid growing effort of public awareness. And to the inevitable, alive, MUMA museum and community.

RE, our friend and fellow artist, has opened her personal show, the first of the museum, surrounding the skeleton of Siso with pieces that talk about a sea of dreams. These objects made with paper pulp and plastic awake something ancestral and make the hart miss some beats. Materials are transformed to express her own denial. The abyss like God, when god is chaos, the abyss, looks back, as Mose’ Previti writes in his beautiful foreword in the catalogue of the exhibition.

Both the ghost of the whale and the spirit of the abyss depicted in the works created by RE for the occasion deny the paternalist cynicism of local institutions, of those that have always a moth and a half full to affirm. Local big man that see culture only if responds to their immediate political gain and submit to their old logic of affirmation, almost religious. The deniers know that their only weapon is their power of transformation, without any fear, of the abyss into stories that children can feel, make their own and understand.

As Trasformatorio we helped the way we could. Thank to all our friends in Milazzo to accept our little help with joy and gratitude.

And so we stand proud with this new cultural effort in Milazzo, the MUMA and her crew, with the choice of the curator, Giuseppe La Spada, with the empty body of the whale, with the abyssal talent of RE, and with all the friends there that deny, as true oltranzists, space to the big void around because they have too much to give..

The show “RE: Somewhere in the abyss” is open till the 21st of September at MUMA – Milazzo

the work of RE can be found on http://re-artist.eu