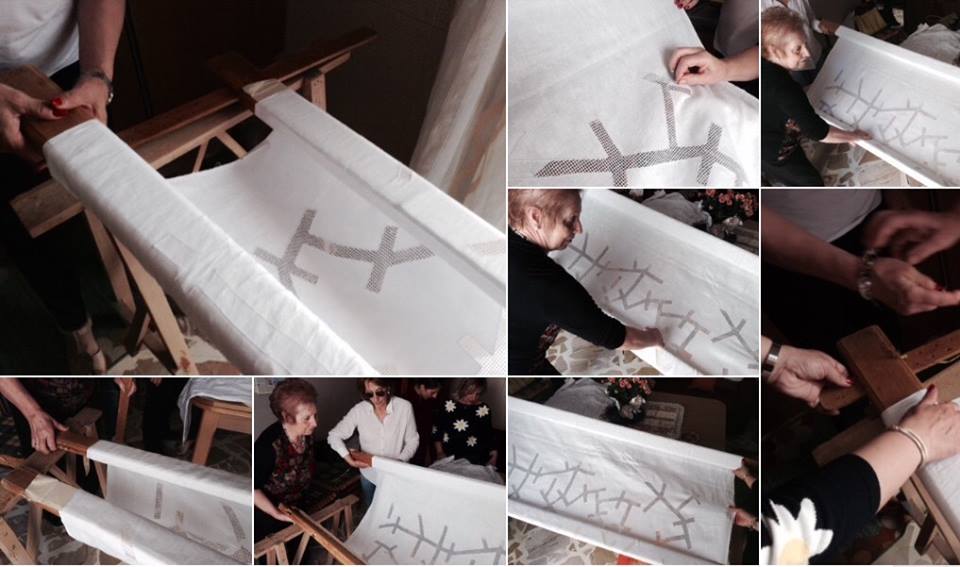 Gandolfo Gabriele David is a Sicilian artist and designer I met in Palermo in 2014.

His talent is to invent and devise actions that transform a site integrating as well images, people with their intentions and stories and landscape with its natural processes. His pieces appear into the landscape as processes and at the same time represent it, wile, at the same time, are acting to cause a bundle of different complex energies to become manifest.

This is proper of a art that is busy with transformations, as such is interesting for trasformatorio as well.

The first installation I saw of Gabriele was only in pictures, is OSEA 2, was set up for the Gibellina contemporary art open air museum close to the famous Cretto di Burri.

There Gandolfo designed and composed an image using old barley seeds directly on earth and asking people to fill the shape. Little by little birds and ants dissolved the piece in front of viewers of the opening ceremony literally “seeding back” the landscape.

In another work, called OR-I-OR and that I had the chance to see wile I was in Palermo last autumn guested by Dimora OZ, Gandolfo gathered around a circle, drawn on earth in front of the Museo Riso in Palermo, 60 people; each one with a bag and a story regarding earth. Earth from associations that put to use properties confiscated to the mafia, urban gardeners, people that used to have a piece of earth of their family in their memory. All together, sharing stories and a bag full of earth. They all composed in a long and intense ritual a shape that stayed for days in front of the museum putting all those earth together with a moving effect. A piece of striking beauty that will remain forever, together with stories and people in my memory.

Gandolfo approach to art has a personal angle, an eye that puts us close. He wants to design in a horizontal and participatory way. And his design is beautifully simple, functional, and magically helps release the most positive energies. Stories made into actions that are often inexpressed in our society. As for example in “Pane”, were he involved some refugees from a “boat people” camp in Salemi to draw with him a new shape of votive bread. Here the local and century old tradition of altar pieces made in bread evolved in a design that literally puts together many breads to composes a new shape and acquires a strong, and immediate symbolic value.

A new work has just been presented in Alcamo, and closes with a workshop of the Project “Creative LAB” initiated by the contemporary art foundation. Here Gandolfo re introduces, in a lovely manner, another element of the local disappearing traditions. He invites it to a context were “makers” and art lovers alike “drool with glowing eyes”. The experience and dexterity of the embroiderers of Alcamo becomes the center of this reinterpretation of OSEA_2, as if, in a game with mirrors and stories, design and matter has to transform from one media to another.

The concerted nature of the project and the workshop does not center only on craftsmanship, but explores the relational level in the research of Gandolfo that wants to connect places and people, traditions and contemporary languages. His idea was “ to bring on canvas installation born as a work of land art, coming from the image of a cracked earth, a wound on which to intervene with an act of love” to its loving end.
So he invited the embroiderers of Alcamo to take charge of all these previous suggestions and to create a work of sacred character, that refers directly to the altar panels that adorned the altars of the churches of Sicily.

This project relied on the delicacy of a feminine gesture, a sensibility that is also proper to Gandolfo, that becomes symbolic of the “necessary work of mending the fractures made by the predatory violence of modern civilization”. Fractures in the landscape that includes humans and plants, animals and things and the stars above.

The technique of the ‘rete a tulle’, is a technique that provides for the slip-off of the plots and the construction of a string that points out and locks the design before embroidery, and was a decision taken collectively in the first phase of the workshop. The panel, made during the workshop. It has been completed, as a performative act of delicate and horizontal nature, during the opening evening last week.

About Gandolfo’s installation OSEA you can download a photobook here.
He can be found via the super active co-working etherogenous group “Dimora OZ” in palermo.