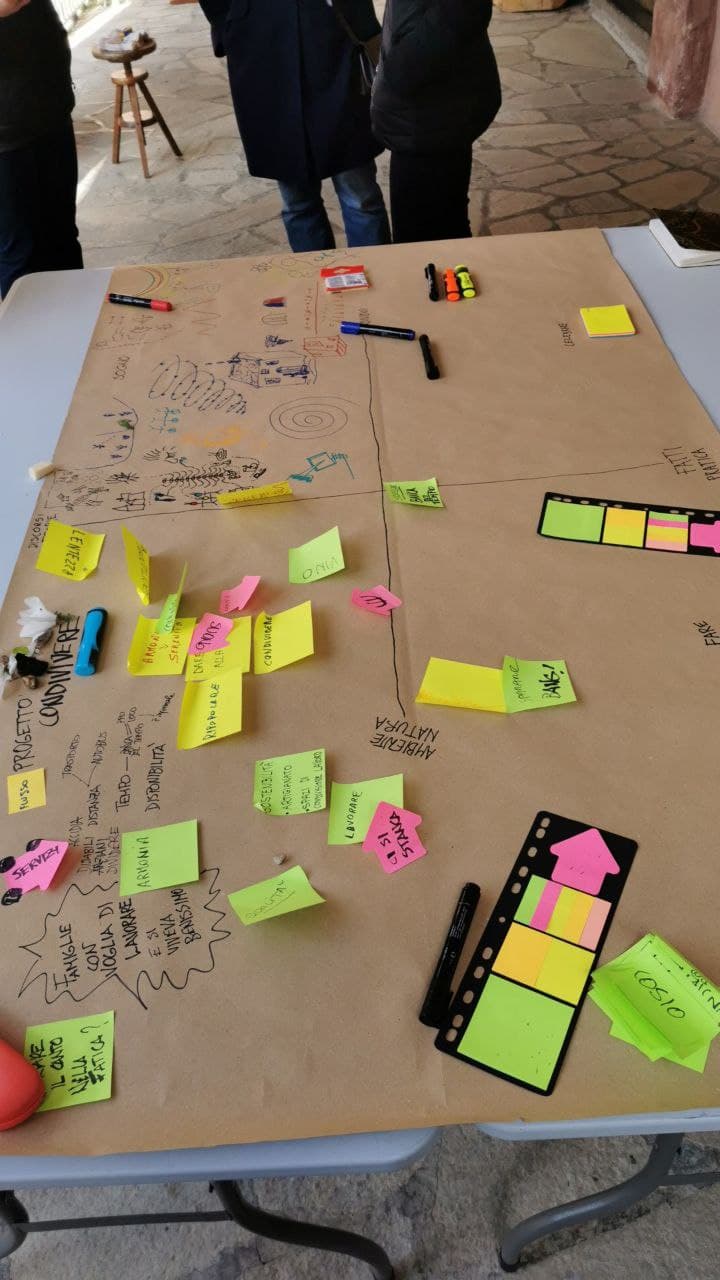 Yesterday we gathered with about 35 citizens of the remote italian village of Cosio D’Arroscia, for a peculiar kind of facilitated project meeting, a Dragon Dreaming. The scope was to create a planning table and to work out a vision for Cosio in 2030, to shape future projects to. And to do it in a collaborative, bottom up way, collectively.

The day started with the set up of a table, the ring, the circle. the coordinator explained that the scope was a bit like revive the Trasformatorio between the people there. While Trasformatorio lab was lived by the inhabitants of the small village as a long process that involved artists just few moths ago, the table quest was directed to them.

The starting point was the dream. People closed their eyes and started to imagine to wake up in their village in 2030. The sensations, the things to do, the smells, possibly to fly around and look to what there was there notable to them.
The dreams were not spoken but drawn on the paper. Each villager took her/his favorite color and started drawing. Then, still unspoken the drawing had to be transformed into a word, put on the poster were it should be put, closer to theory or practice, to the individual or to the environment.

Some work came out twice, like “Harmony” and some were very loudly spoken, like “work”. From that point on a stone was introduced. Holding the stone in the hand each of the participants spoke out their drawing and explained their world in the peculiar relationship. The others listening in silence.

We don’t often consider that celebration time is important not to burn out, and that is important that the endeavor is collective, that the dreams are dream by everyone participating, in a way they become bigger than the single one. People spoke of decisions, and took them, people spoke of their fears, and of nightmares, and of the past and the difficulty in inventing a future for the little village.

The time we spent planning was terrific. We came up with the task of “making new Cosians”. Someone was skeptical about the possibility, but the core of the objection was used by others to show differently. How to repopulate the village without finding a way to keep the community alive? A path to keep the community values can be re imagined into the XXI century and was. A big part in it can be the exchange of knowledge, the opening of the community.

Zio Peppino, 90, came in to tell us that the image for him was an image of families working together in harmony. There was a lot of music in the dreams and it was taken as a image of sharing rhythm in work and harmony in life. The circle agreed, the timing was perfect. And the group tended to lean towards a title for the project: Condivivere. Meaning “living-sharing”. For now it is adopted.

Many resources were put on the table at this point to realize the vision. A map for the gardens that would be available to families that wish to come to live in Cosio, a map of houses ready to be rented, the amount of rent that could be set aside to fuel creativity and finance artist residencies, because the village craves for art to be made there, with all the beautiful colors they saw used in 2021 during the lab.

As a last step we started to put the available people over to the tasks put down, and the plan started to look less and less a dream, and more and more at hands reach.

We are really proud of Cosio, of seeing how much of the artistic work was able to come in and populate the dreams of the citizens, gave them strength and colors.

We were as well a bit sad, to see all those colors, the colorful vision, confronted with the harsh monochrome image of the contingency ahead. We believe that the flow is starting to move anyway and will gain strength, because the evolution of the village cannot be defined without taking into account the ghost in the place, the Genius Locii.

So new cosians are ahead, they are in the making, and nothing can stop them to come to be. We just wish that all will wear those beautiful colors that were used on the drawing board and holding the speaking stone Sunday.

One thought on “Rigenerando Cosio: Dragon Dreaming in Cosio D’Arroscia”